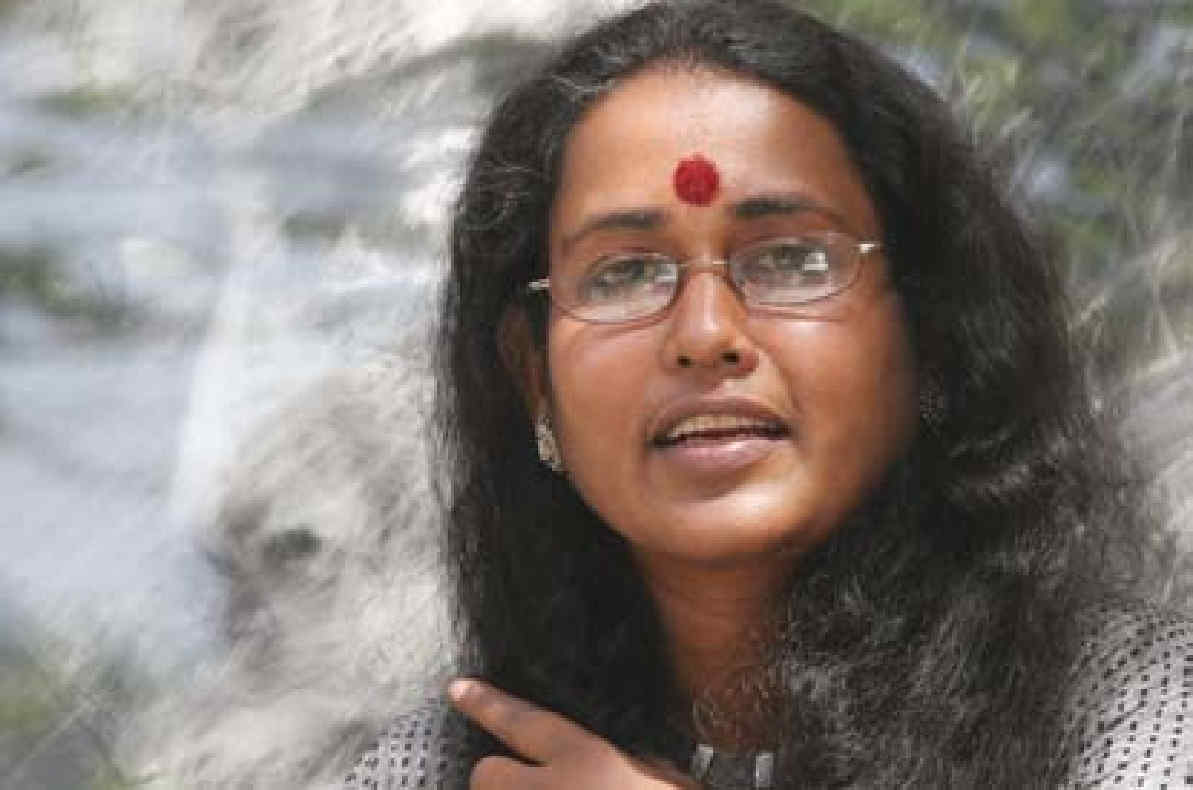 Sajitha R Shankhar is an internationally acclaimed contemporary artist from India. Her work explores the myths and mysteries of the female body while resisting the oppression of patriarchal definitions and power as can be seen in her two important series 'Alterbodies' and 'Archetypes'.

She was born in 1967 at Kumaranalloor, a South Indian village in Kottayam District of the state of Kerala. After completing a BFA degree from the Government College of FineArts, Thiruvananthapuram, she worked for three years at the Regional Centre Studios of the Lalit Kala Academy in Chennai and consequently lived and worked at the Cholamandal Artists Village for 19 years. During this period, she travelled to the major art centres in the world, attended workshops, did collaborative work with artists and writers and put up several shows in major art galleries across Asia and Europe.

She was a member of the Lalit Kala Academy, Kerala for nine years, from 2002 to 2011 and served as a member of the jury for art exhibitions conducted by the Kerala State Annual Art Exhibition and All India Fine Arts Society. She was also on the governing body of Vyloppilly Sanskriti Bhavan, a cultural organisation run by the Government of Kerala in Thiruvananthapuram. In 2007, she launched an innovative centre for art, namely, Gowri Art Institute at Kallar, near Ponmudi, a hill station on the Western Ghats, as its founder-director. She had worked at the Garhi Studios of the Lalit Kala Academy, New Delhi.

She has held over 30 solo-shows of her works in various cities in India and abroad. Notably in, Thiruvananthapuram, Chennai, Bangalore, Bhubaneshwar, Kolkata, Kochi, Paris, Vienna, Valladolid ( Spain), Bochum, Essen, Metzingen, Oberhausen (Germany), London, Oxford, Hexham and Northumerland ( U K). This is besides over 50 group-shows around the world. She has also taken part in as many workshops and art camps and organized many on her own.

Her honours include the Charles Wallace Fellowship, Senior Fellowship from the Dept of Culture, Govt of India,( 2009-2011), a French Scholarship for an Artists Residency in Paris( 2006-2007), Senior Award at the special exhibition to celebrate the Golden Jubilee of Indian Independence held in Tamil Nadu( 1997), Grand Prize at the Cleveland International Drawing Biennale, U K ( 1995) besides Kerala Lalit Kala Academy award and Lions Club Award. Most recently, she has won the Pollock-Krasner Foundation Grant in 2017.

Sajitha Shankar was one of the 14 leading women artists honoured by the National Legal Service Authority in 2008. Her works are in several collections in India and abroad including those at the Alliance Francais, National Gallery of Modern Art, Delhi Art gallery, Lalit kala Academy, Delhi, Malayala Kala gramam, Mahe, Kerala. She has also illustrated many works of poetry including one of Kamala Das.

Her biography is being written by the world-renowned American art historian Gail Levin. Sajitha's latest show is coming up in New York, in September 2021. Currently she is based out of Thiruvananthapuram, Kerala.